A Day with the Magicle Ice Cream Truck

Last summer, Sidney and Katia San would lie awake at night, hearing music. Sidney would get out of bed and walk down to their garage believing he must have left the music on in their new ice cream truck. They heard it clearly.
But the music wasn't playing. The tinny melodies were just bouncing around in the heads of the Passaic couple in their first year as ice cream truck vendors.

"At the beginning, we would hear it all the time," said Sidney, 33.

There are 50 songs, but it all blends into one never-ending pinging melody. Forget dealing with the crazed kids, rude adults, two freezers packed with more than 120 choices, remembering prices and to close the freezer, the real question in my day on an ice cream truck was — could I get through the hours of "It's a Small World," "Happy Birthday" and the theme from "Love Story" (really) without lunging at the controls or losing my mind?

Sidney and Katia San volunteered to teach me the ways of the ice cream truck world. They bought the truck three years ago after hearing about someone who did very well with one. They wanted to make more money with something of their own — in addition to their wholesale electronics sales business. The first year was spent fixing up the truck and doing research. They began vending last year in the seasonal business that goes from April to October, but typically hits its peak from late May through July. The rest of the year and on rainy days, they concentrate on their other business, which suffers during the summer season.

The owners of MagicLe Ice Cream Truck go to Paterson to pick up their stock but on this day had enough without needing to make that stop which usually takes an hour. The Sans keep their freezers very organized out of necessity, not OCD. They have to move quickly to keep their customers happy and keep from leaving the freezer open too long.

The smaller freezer, which can be packed higher and tighter, holds the ice cream that will melt faster — the characters as well as the Toasted Almond, Strawberry Shortcake and Chocolate Éclair and Magnum bars. They have labeled each box and stack them three and four deep. The best-sellers like Spider-Man and Sonic the Hedgehog have a box or two more than the others. Katia handles that freezer. 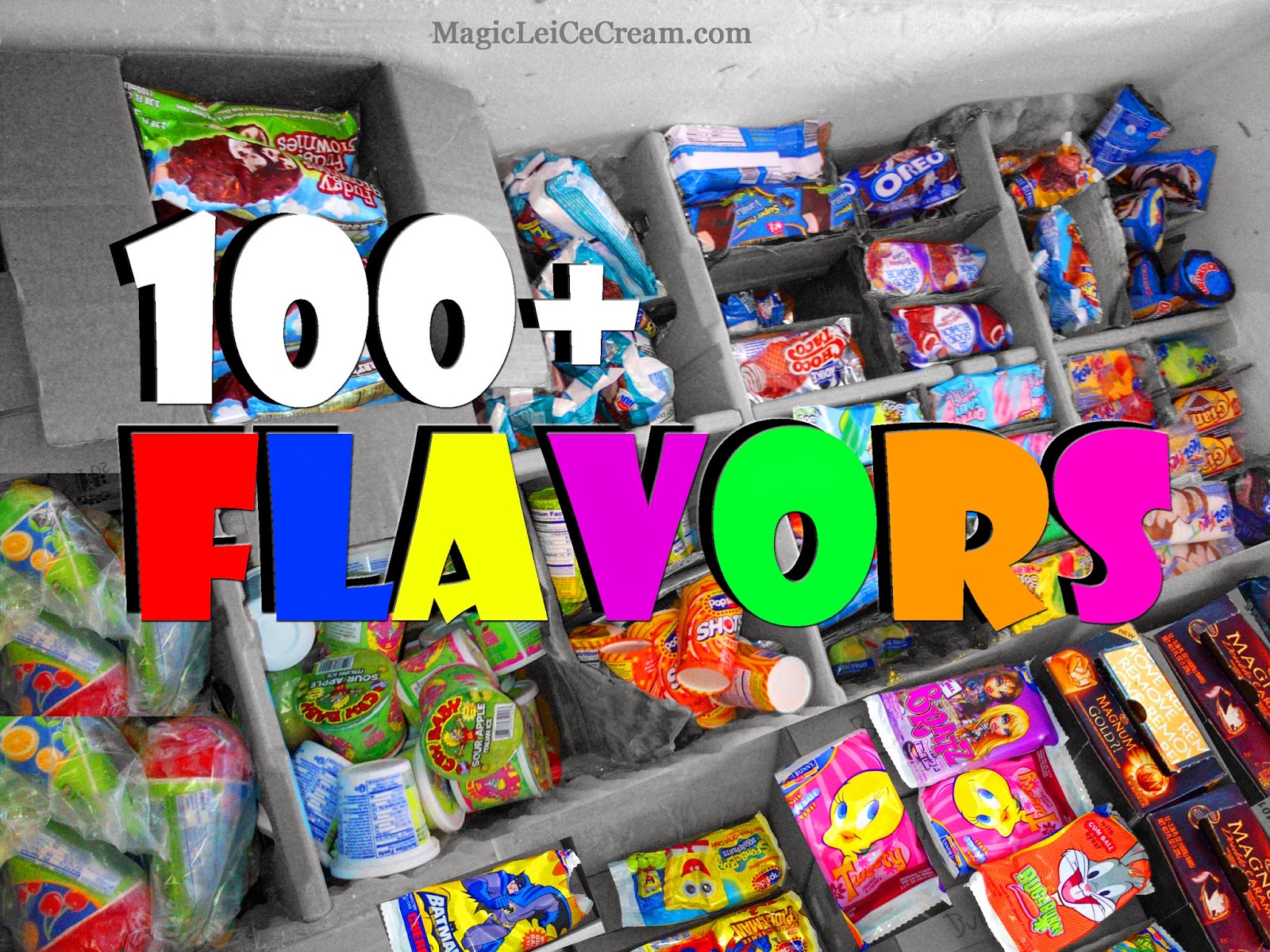 The big freezer is Sidney's domain. He knows the location of every flavor of ice pop, Italian ice, ice cream sandwich, cone and novelty bar. Overall, the truck can have more than 3,000 items in the freezers when it's full, as well as snacks and drinks.

Doing this right takes more than knowing the difference between a Drumstick and a Chocolate Éclair. It takes patience.

My six hours in the truck was a lesson in interpersonal skills and customer service, as well as logistics and business. The couple moved effortlessly from excitedly greeting large crowds of kids at day care centers, to speaking Spanish to families in a park and workers on their break to discussing Kosher choices with Orthodox Jewish families.

They seemed to know everyone. They asked about family members. Sidney shook hands and fist-bumped the grown men he knew and waved and smiled at every kid.

"The way we would want to be treated is the way we approach the truck," Sidney said.

The Sans, who are approaching their 10th wedding anniversary, can spend hours together in the small truck and still laugh with each other at the end of the day.

I walked away with a Creamsicle and a new found understanding of the world on the other side of the window. From Katia and Sidney, there were two big takeaways:

Lesson No. 2: "Every day is not always rainbows," as Katia put it.

It was clear immediately from my first stop at the Clifton Little School that it wasn't easy to keep track of orders and money when little kids are screaming and little hands are shoving sucked-on dollars and piles of quarters at you.

It's difficult to tell a 4-year-old she doesn't have enough money for Hello Kitty. Sidney used to feel bad too. He would give the kid the ice cream for whatever she had until he realized that parents were knowingly giving their kids less than needed.

It's also difficult to tell a child that the truck is out of something. They will repeat their order then look crushed when they finally hear: No Cyclone today. No Batgirl, ever. 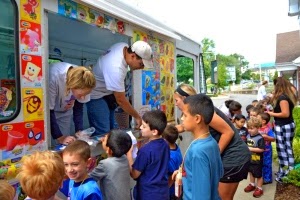 But the fight for ice cream gender equality would have to wait. Somewhere someone was craving a Toasted Almond.

On this day, fall-like temps combined with the waning summer weeks for long stretches without customers. In the downtime, I learned that life inside the white truck isn't always as sweet as it seems. This is hard work and can reveal the ugly side of people as much as it does the innocent joys of childhood.

The metaphorical rainbows faded away when a man angrily (and inaccurately) accused the Sans of playing their music for long stretches and disturbing the neighborhood. He eventually left but the confrontation was unnerving.

On the hottest days, the inside of the truck can get unbearable. There's no air conditioning, because if they closed the windows to keep the AC in, they wouldn't hear the kids yelling for them. The truck makes regular stops at schools and companies, visiting parks and neighborhoods. The Sans are out all day, every day with good weather.

"You can't eat or go to the bathroom," said Katia. "There are rude people even though you're smiling."

Family barbecues on summer weekends go on without Sidney and Katia, who can't afford to miss a good day to be on the street or decline one of the private events that Sidney hopes will eventually be the majority of the business.

"We have to take advantage of the season," said Katia.

At night, they answer emails and try to update their Facebook page. They focus on ways to separate themselves from the fleet of ice cream trucks.
In the early days there were angry competitors looking to derail them. At one point, Katia told Sidney to sell the truck. It wasn't worth the stress.

"We had no idea it was like that," said Sidney, who was left to his own research to figure out the basics of the business because no one else would give away their supplier or method in fear of losing an edge. The learning curve cost them early on but they seem to have caught up quickly. 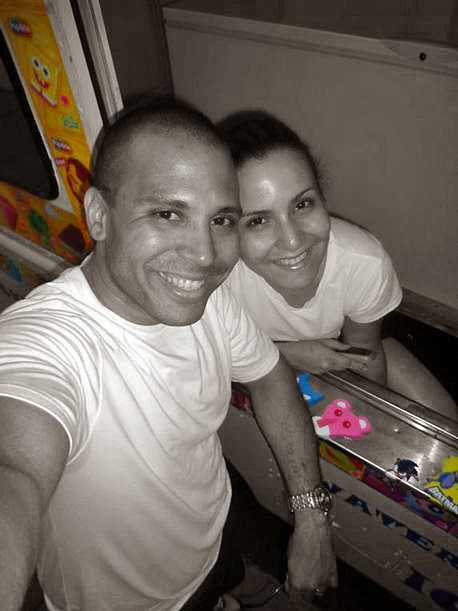 The Sans are happy they made the investment. They have met more good people than bad, they say, and they no longer hear the music hours after they've gotten off the truck.

"We have fun," said Sidney.


THIS IS THE ORIGINAL FRONT PAGE TWO PAGE ARTICLE: 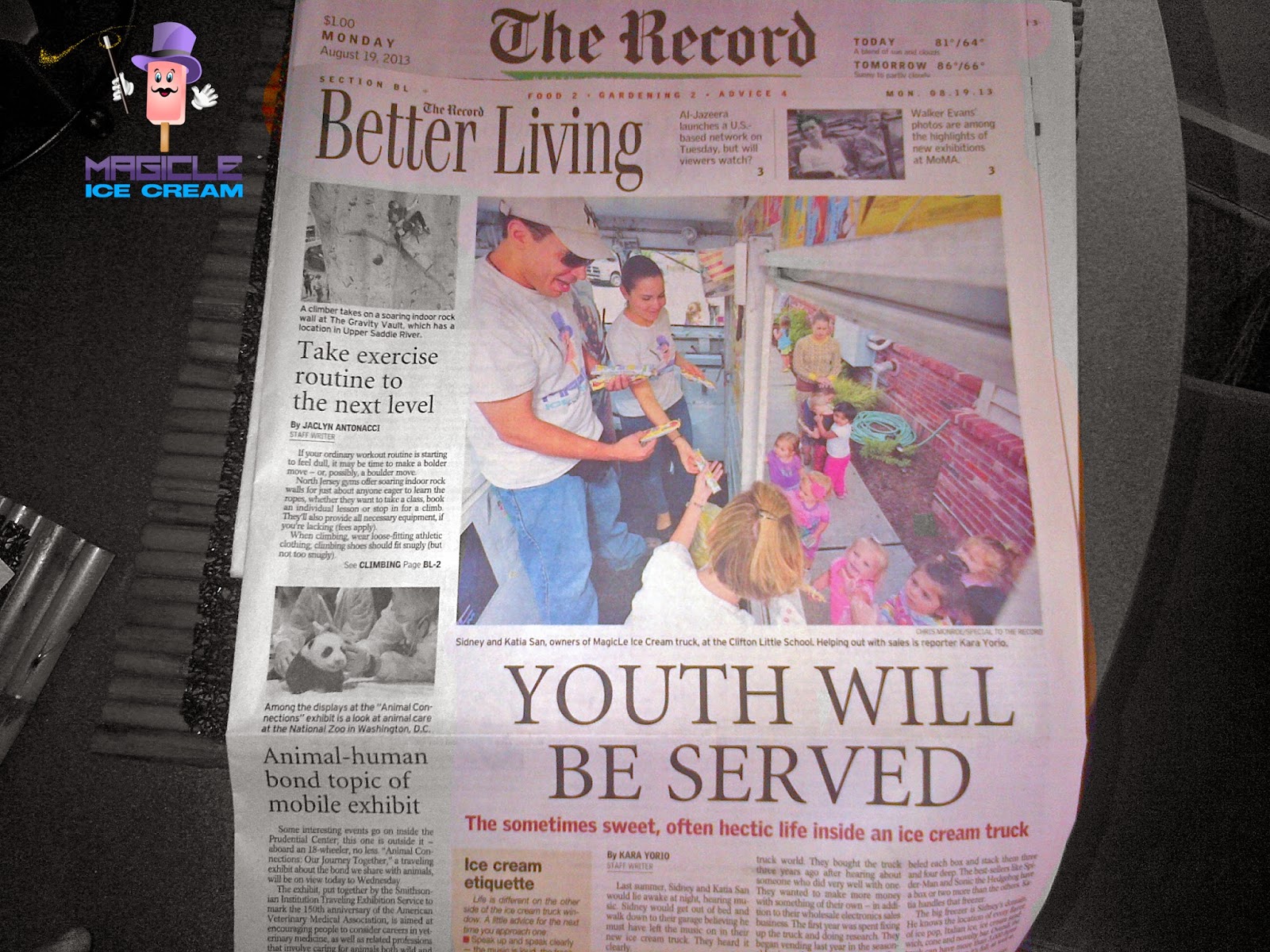